Okay - I've been taking a short for-credit course from the UK Open University, and since it has a reflection task at the end of every week, I had some grand lofty plan that I'd cross post that here and perhaps expand on it a … END_OF_DOCUMENT_TOKEN_TO_BE_REPLACED

I'm playing some kind of crazy catch up on the blogging here. I have a whole host of things I want to try write up before they disappear. This will hopefully be a quick one to jump on. Amongst the maelstrom that has been the … END_OF_DOCUMENT_TOKEN_TO_BE_REPLACED

I'm definitely overdue a number of blog posts about where the heck I am and what I'm doing these days. I'm in week 7 of a new role as Deputy Provost of Athabasca University and week 8 of living in a whole new country. My … END_OF_DOCUMENT_TOKEN_TO_BE_REPLACED 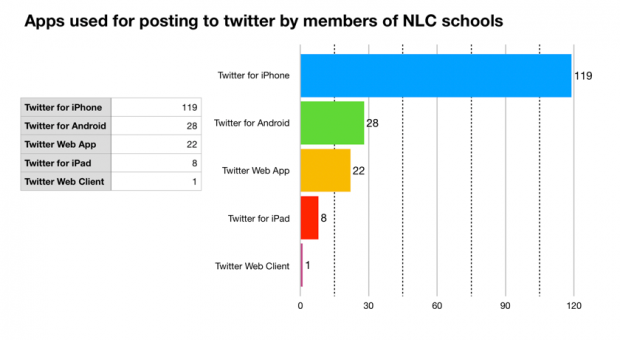 I’ve talked to a fair number of teachers who find it easier to use twitter than to blog to share their classroom learning. I’ve been thinking a little of how to make that easier but got side tracked wondering how schools, teachers and classes use twitter.

I’ve got a list that is made up of North Lanarkshire schools I started when I was supporting ICT in the authority.

I could go down the list and count the methods but I though there might be a better way. I recalled having a played with the twitter api a wee bit so searched for and found: GET lists/statuses — Twitter Developers. I was hoping ther was some sort of console to use, but could not find one, a wee bit more searching found how to authenticate to the api using a token and how to generate that token. Using bearer tokens

It then didn’t take too long to work out how to pull in a pile of status updates from the list using the terminal:

This gave me a pile of tweets in json format. I had a vague recollection that google sheets could parse json so gave that a go. I had to upload the json somewhere I could import it into a sheet. This felt somewhat clunky. I did see some indications that I could use a script to grab the json in sheets, but though it might be simpler to do it all on my mac. More searching, but I fairly quickly came up with this:

This does the following:

This surprised me. I use my school iPad to post to twitter and sort of expected iPads to be highest or at least higher.

It maybe that the results are skewed by the Monday, Tuesday holiday and 2 inservice days, so I’ll run this a few times next week and see. You can also use a max_id parameter so I could gather more than 200 (less retweeted content) tweets.

This does give me the idea that it might be worth explaining how to make posting to Glow Blogs simpler using a phone.

I've got a whole host of stuff to blog from MozFest (and Accessibility Scotland), and I'm sure I won't get to all of it, but here's an attempt at least! One of the best sessions I went to at MozFest was the Black Mirror Writers … END_OF_DOCUMENT_TOKEN_TO_BE_REPLACED

So yesterday and today the Twitter has been on fire about some work that was done over the summer by Emma Carroll, a recent graduate of Edinburgh and working with us as an Equate Scotland Careerwise intern. It culminated today in a really nice news … END_OF_DOCUMENT_TOKEN_TO_BE_REPLACED

I’ve been having a wee play with the p5.js web editor.

p5 .js is a JavaScript library that starts with the original goal of Processing, to make coding accessible for artists, designers, educators, and beginners, and reinterprets this for today’s web. Using the original metaphor of a software Sketchbook, p5 .js has a full set of drawing functionality. However, you’re not limited to your drawing canvas, you can think of your whole browser page as your sketch! For this, p5 .js has addon libraries that make it easy to interact with other HT ML5 objects, including text, input, video, webcam, and sound.

I’ve occasionally dipped my toe into processing and found it good fun.

Over the summer I’ve seen a stream of tweets and instagram posts from Tom Smith which got me interested in p5.js.

I don’t really have much of a clue but have had a bit of fun. Especially when I found you can use a library with p5.js to export gifs. The feature image on this post is one made by my sketch: Classy bramble skulls 4. This one has a background image, some animation, the mid-ground, the sleeper and computer and then the window frame which are drawn. If I had though I’d have used 3 image layers sandwiching 2 animation ones. Early days.

There seems to be a ton of learning material available and it is easy to duplicate interesting p5.js sketches to edit and play around with. (The school holidays are not long enough;-))

Continuing my foray into enquiry-based, self-regulated, mastery learning, I've been hacking away at some more SPLOT code. After my last efforts I felt like I now had enough knowledge to try customise the SPLOTBox theme to see how well it might fit my requirements for … END_OF_DOCUMENT_TOKEN_TO_BE_REPLACED

I could spend 2 minutes watching Google beautiful 2017 video or I could make a gif.