LGBT History month is almost over but before the month draws to a close I want to highlight the brilliant work of the HIV Scotland Wikpedia editathon that took place at the end of January.  The event was supported by the University’s indefatigable Wikimedian in Residence, Ewan McAndrew, and organised by the University’s Disabled Staff Network and Staff Pride Network, who were keen to run another editathon following the success of their previous Pride editathon on LGBT+ Books in Scotland and Beyond.  (I’m proud to have created a page for the controversial lesbian magazine Quim as part of that event.)  I suggested HIV / AIDS activism in Scotland as a potential topic as I’d noticed previously that this important history was almost entirely missing from the encyclopaedia.  Scottish AIDS Monitor and PHACE West had no articles at all, and although an article already existed for Derek Ogg, it only touched on his legal career and made no mention of his prominent AIDS activism.  This omission was all the more glaring in light of the belated public conversation about the impact of the AIDS pandemic sparked by the broadcast of Russell T Davis’ series It’s a Sin.  The Network were keen to address this omission and HIV Scotland also came on board to support the event, and I’m pleased to say that six new articles were created and several others improved. You can find out more about the articles created on the event dashboard here: HIV Scotland Editathon.

As part of the event, I wrote an article about Scottish AIDS Monitor, an organisation I first came into contact with in 1992 at an event at the Tramway which coincided with their seminal exhibition Read My Lips: New York AIDS Polemics.  That event and exhibition, which featured works by Gran Fury, Keith Haring, David Wojnarowicz, Felix Gonzalez-Torress and others, left a huge impression on me.  I was aware of the AIDS pandemic, growing up in the 1980s it was impossible to ignore, even in the Outer Hebrides. Who could forget the stigmatising horror of the Don’t Die of Ignorance campaign?  But it was Read My Lips that really brought home to me the deeply personal impact of all those lost lives, the fight for justice and recognition, and the importance of organisations like SAM in raising awareness, providing support and promoting safe sex. 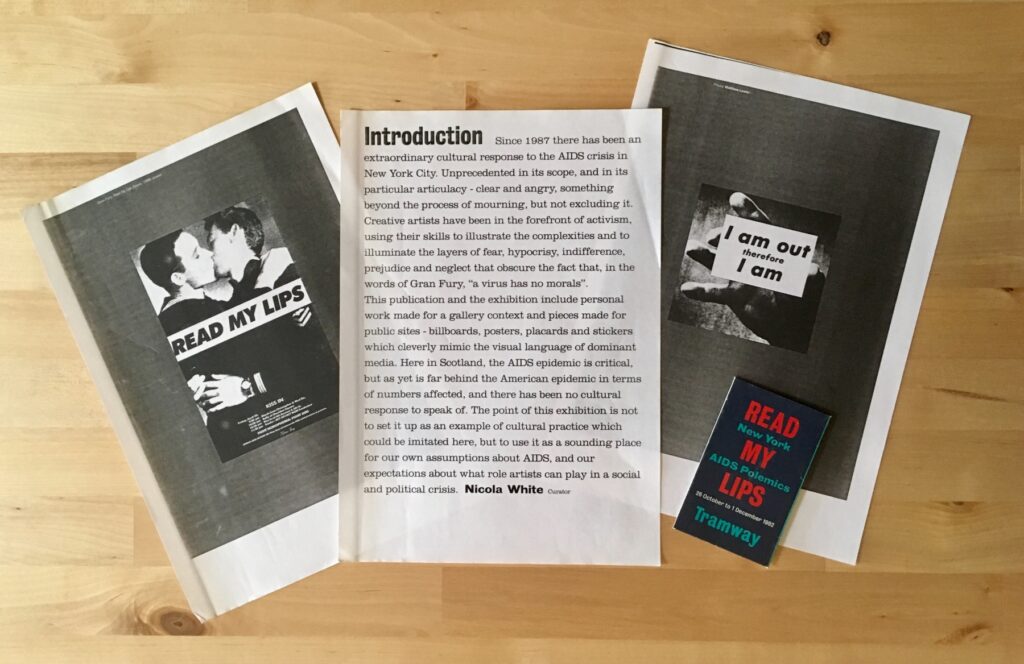 Returning to It’s a Sin, the second article I wrote this month was a biography of Jill Nalder, the actress and activist who inspired the character of Jill Baxter and who played her mother in the series. I know that there has been some criticism of the series for stereotyping women as carers, and for centering the experiences of a woman whose own sexuality and relationships are elided from the show.  While there’s a discussion to be had there, I think it’s important to acknowledge the many many “ordinary” women who played an important role in awareness raising, fund raising, befriending and yes, caring for, people living with AIDS from the earliest years of the pandemic.

I still have a copy of the Read My Lips exhibition catalogue, which includes a transcript of Vito Russo‘s seminal speech, Why We Fight, from a 1988 ACT UP demonstration.  These lines really resonated with me.

“AIDS is really a test of us, as a people. When future generations ask what we did in this crisis, we’re going to have to tell them that we were out here today. And we have to leave the legacy to those generations of people who will come after us.

Someday, the AIDS crisis will be over. Remember that. And when that day comes — when that day has come and gone, there’ll be people alive on this earth — gay people and straight people, men and women, black and white, who will hear the story that once there was a terrible disease in this country and all over the world, and that a brave group of people stood up and fought and, in some cases, gave their lives, so that other people might live and be free.”

Wikipedia is the fifth most visited website in the world, with aspirations to provide “free access to the sum of all human knowledge”.   For this reason more than any other it’s critically important that the history of HIV and AIDS activism is represented on the encyclopaedia.  So that those generations that come after will be able understand the legacy and the courage of those who stood up and fought.