As a Glaswegian it’s been great to welcome #cop26 to Glasgow. I am sure our visitors are picking up friendliness of city. The friendliest city in the world. There were some cracking placards on Saturday reflecting humour of crowd. I am posting this as I was asked twice today in external meetings about what's it like to be in Glasgow at moment. 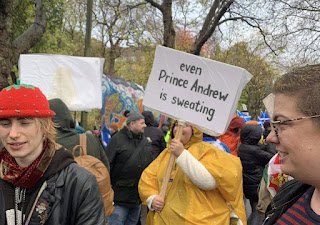 https://twitter.com/PuddingPop0802
I’ve been working remotely most days but in the city and College on Tuesday, and on Friday in College as duty manager. The city campus has a great range of Cop26 events on and the Riverside Campus is hosting the large International Cop26 Maritime Hub. Both building and libraries are open for students and there is a full programme of events for learners and the community.

My commute from south side into City centre has been pretty much as normal and if anything the city is much quieter than I expected it to be. I’ve not experienced the disruption and road closures around the UN Blue Zone north of the river. But was very aware of the increased police presence across the city centre. Particularly on my walk back to central station on Tuesday evening I was suddenly in a phalanx of armed police but I think Leonardo DiCaprio was doing some shopping nearby.

I thought there would be more going on and a more visible presence of all the visitors. I do hope they are getting out and about and enjoying the city. The autumnal rain has been torrential this week

I was kindly invited to participate and contribute to a Herald and Epson sponsored event on education and #cop26 on Tuesday morning. Thanks to Doug Belshaw for line and it was a 'white manel' but the audience was diverse and included school pupils. 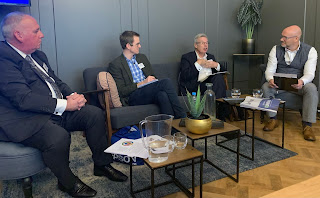 There was some pessimism about role education can play in whole carbon neutral agenda 80% of school buildings today will still be with us in 2040 and they are hard to heat and insulate. Consensus seems to be that without gas boilers best way to heat schools is by biomass boilers.
Our domestic gas boiler went on blink to this week so I had a chance to talk to a british gas engineer. Old houses will never be able to take all the insulation needed for ground or air source heat pumps.  Hydrogen is apparently the answer. We'll see I hope boiler has a few years left of life.

I am really fortunate to work in a new build and an institution that has thought through its own contribution towards the zero carbon agenda and as a skills based organisation leading out changes to other sectors of the economy.

There has been lots of progress around getting a green curriculum into schools in most subject areas. This is easy to understate and some in the audience felt that special new green subjects should be shoehorned into the curriculum.

My bigger reflection;  the schools and media do need to end their fixation on SQA  changing its name is not going to change culture. One of the panel even suggested that everything can change, but attaining 5 highers will still be the gold standard,  that’s not really change at all. The debate strayed for a while onto global warming is really all SQA's fault.

We really need to get away from a knowledge based curriculum and move to a competency based system. What you know is good , what you can do is much better.

On Saturday I did my own bit and went out and enjoyed the #COP26 demo. I think there was around 150,000 people out on the streets and met many international folks and protesters from across the UK. Not tens of thousands as the BBC reported - pretty shocking really. The rain was torrential. 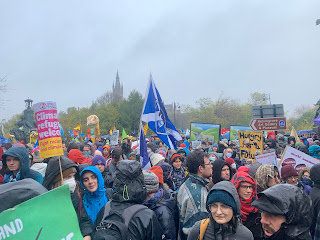 I hope next week brings some sensible and workable actions from #COP26 . 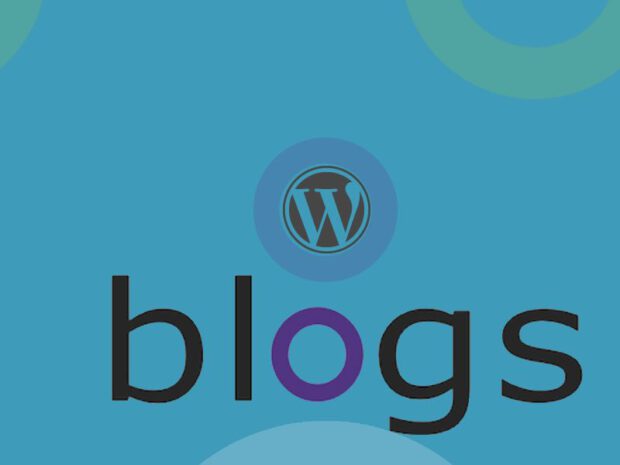 Every now and again I take a trawl through all the Local Authority Glow Blog home pages. It is interesting to see into all sorts of learning going on across Scotland. Here are a few that caught my eye:

Linked, in my mind at least, is outdoor learning, there is a fair bit of that going on too:

In a few days’ time, Scotland will play host to COP26. The eyes of the world will be on Glasgow, and the conference has been discussed in terms of being a last chance opportunity to create the change needed for human life on this planet to be sustainable. What is meant by sustainable development needs to be defined clearly, and the best definition I’ve come across goes back to the UNWCED in 1987. It stated that sustainable development was:

“development that meets the needs of the present generation without compromising the ability of future generations to meet their own needs.”

This has the beauty of simplicity, and also broadens the definition beyond purely environmental issues. It is also about the economy, political structures, education, culture and society. Whilst I am no expert on climate science, I am comfortable to talk about the role that education has to play in creating a sustainable future. In fact, I would argue that the single most important intervention we can make in the battle for a sustainable future is actually in education. Here’s why.

The Problem of ‘Peak Human’

Peak human is the moment when population growth plateaus. Population growth globally actually hit a high point in the 1960s and has been slowing ever since, but we have yet to reach peak human. There are two key issues here:

Projections on the date and level vary, as shown by this graph from the UN Population Division.

The high variant shows the global population at over 15 billion people in 2100 and still climbing. The low variant shows peak human coming around the mid-point of the 21st century at around 9 billion and then a gradual decline following. Needless to say, the former projection will exhaust all resources no matter what we do, whereas the latter makes it much more likely that we can find solutions to the problems we currently face. The most recent projection published in the Lancet suggests that the peak will come in 2064 at 9.7bn which is more optimistic than we might previously have thought.

What will make the difference? Educating girls around the world. Where girls have access to secondary (and ideally tertiary) education they are less likely to be forced to marry early and have multiple pregnancies throughout their life. This leads to a natural reduction in population growth and makes the challenge of feeding, housing, and providing energy for the world much more feasible. In this respect, education – and SDG 4 – are of critical importance.

I’ve been working with the New York Times, Summerhouse Media and Kite Insight on the Educate on Climate programme at COP26. The NYT has created a Climate Hub which is a brilliant venue (Es Devlin’s ‘Conference of the Trees, the featured image of this post, has to be seen to be believed). We’ve spent the past few months thinking about which issues to tackle. The NYT are looking at various strands so education is just a part of this, but on November 5th we have a programme which tries to explore as many core education issues as possible. Online tickets are still available and are free, with content being recorded and available to view later on.

So what are looking at? Here are the debates that we’ve got lined up:

The steer given to all speakers is that the audience should have practical takeaways from their session. The dynamic we are looking to create is a platform where students and educators can really put policy makers and those in power on the ropes.

It’s impossible to be comprehensive when exploring the ways in which education can be the solution, and we were left with so many good ideas that we couldn’t fit into the time we had. We’ll think of how we can use these ideas to carry on the conversation long after the UN has packed up and left Glasgow.

What Do We Want to Achieve at COP26?

In the many meetings and discussions I’ve been involved in over the past year, it’s clear that we’re way past the point of raising awareness. What we need to do now is tackle two key things: attitude and behaviour.

Many young people are left struggling with what to know and think about the crisis we are facing. ‘Climate anxiety’ is a term that has come into public discourse, and I think it’s unhelpful. A recent study led by Bath University found that 56% of young people believe that “humanity is doomed”. The narrative that underpins this makes it less likely that our students will feel motivated to tackle a problem if they are led to believe that it is futile. Self-fulling prophecies are not what we need or want.

Instead, what we need to do is persuade students that a) the problems we face do have solutions and b) that they have agency to make a positive contribution. It is not too late, it is not insurmountable, and it is something that every one of us can influence. That should then lead to a change in behaviour. It is not only about the behaviour of all school age pupils, but the positive impact that their action can have on older generations. Making everyday decisions, even at a very basic level, will affect change.

I’ve written about this before, but Generation Z clearly cares about this issue more than any other. The Greta Effect has led many students to believe it is better to miss school and campaign for change than stay in a class and learn more about the issues. That is either a damning indictment of education on sustainable development (ESD), or evidence that it has energised young people and created a global call to action. The jury is still out on that, but we’ll be discussing it at the Climate Hub.

What we definitely want post-COP is a paradigm shift, with change ranging from macro level policy to micro level behaviour, so that humankind has a future beyond this century. There have been many mass extinction events in earth’s history. Our species will either be the first to be the architect of their own demise, or the first to escape this fate. I hope that COP26 is looked back on as a significant turning point, for the better.