@vasta on micro.blog posted about satellitestud.io/osm-haiku/app (one of my favourites)

we automated making haikus about places. Looking at every aspect of the surroundings of a point, we can generate a poem about any place in the world.

I’ve been having fun generating random haiku and then matching with photos from my camera roll of the same places.

Obviously, this is a summer holidays post, not work related. One of my long-term popular posts on this blog is about Using Garmin eTrex Vista HCx with Ubuntu 14.04LTS & QLandkarte GT. That post has the info about how my eTrex is set up to connect to Ubuntu and to use OpenCycleMap, which still works for me. This post is just about the route planning, which has moved on. In short I use Google Maps in cycle mode plot the route, mapsToGPX.com to download a GPX of that route, gps babel to simplify and transfer the GPX file to the eTrex, and QMapShack to view and manage the various GPX files on Ubuntu. For navigation en route I follow a planned track on eTrex and/or on my phone using OSMAnd.

I tend to do my route planning for bike rides on Google Maps. I’ve tried lots of others, including the following a route using the Garmin eTrex or phone/OSMAnd as satnav, and routing on QMapShack, on Cycle Streets and Bing Maps; they all have their strengths, but Google wins because of two features. First, it’s dead easy to change the route by adding and dragging an intermediary way point; second street view and the aerial photos let me check out the type of road/track that it’s sending me on. There are still one or two stretches of cycle routes that it won’t add to routes, but another factor when compared to some other routing services is that it won’t send me on a detour over a rough path instead of a short distance on a medium busy road.

Once I have the route I want, I use mapsToGPX.com to convert it into a gpx files of the track point and route points that I download. For the route points I use the advanced options to get next turn info and turn directions. There may be other options, I haven’t looked because this does the job nice and simple (it’s nice to leave a donation if you think so too).

The only problem with the route points gpx file is that is has way too many  points for the Garmin. gpsbabel has a great option that will simplify by removing any points that are within a set distance of the line drawn between its neighbours. So if you’re happy with the line being up to 100m from the actual route point (which I find works fine) you can use

That done I use QMapShack with the OpenCycleMap map to view and manipulate the route and track gpx files. I check that the route isn’t missing any obvious cycle routes. Google Maps is good enough at using cycle routes, but doesn’t display them particularly well, so they’re easy to miss. Actually editing the track or route on QMapShack is a bit of a pain, but it’s really quite quick to edit on Google Maps and re-download. I sometimes create waypoints in QMapShack with the name of the route point turn instructions. I put the route the track and the waypoints into a single project, (and if I am planning a multi-day tour I put all days into a single project) and save as a single GPX.

I haven’t been able to get QMapShack to talk to eTrex, so I use gpsbabel to transfer the files:

To transfer to my phone I just plug my phone into the USB and mount it for file transfer copy the file over and choose to display the GPX file from the Configure Maps option.

When riding, I just follow the track on the GPS device (phone or eTrex) with the waypoints giving me text hints (I would love to know if there is an easy way of setting proximity alarms for way points in bulk on the eTrex, to give alerts when a turn is coming). Having the route to display can be useful at times, but I have found that both devices tend to send me on unwanted detours and down unsuitable paths if I allow them to use the route for navigation. On the phone with OSMAnd, using a track for navigation works better, but there is a problem with the battery life on longer rides. 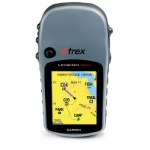 I have a rather old Garmin GPS eTrex that I use for GPS on walking holidays and cycle rides. I use it with OpenCycleMap contour maps downloaded from talkytoaster. To plan routes and manage the routes, tracks and maps on Ubuntu I use QLandkarte GT.  This summer was the first time I used this combination on my new PC, and I found some of the config difficult because the info I could find (e.g. this from GPS babel) related to old versions of Ubuntu (not surprising, this garmin is from the Ubuntu Feisty era). What needs doing seems similar but how you do it has changed.

I edited /etc/modprobe.d/blacklist to stop Ubuntu loading the garmin_gps module.  I don’t know if this is necessary, but everything I want seems to work with it there. That file now looks like:

The to make sure that the Garmin is automounted r/w for all users when plugged in to a USB post I created /etc/udev/rules.d/51-garmin.rules , with the content

I found the lsusb and the gpsbabel utility  useful in testing the connexion. With it installed and the etrex plugged in I now see

And then in QLandkarte I can go to setup | general and under the “device and xfer” select Garmin in the main drop-down and EtrexVistaHCx in the Device Type (other Device options left blank) and happily transfer routes and tracks between the PC and the GPS. 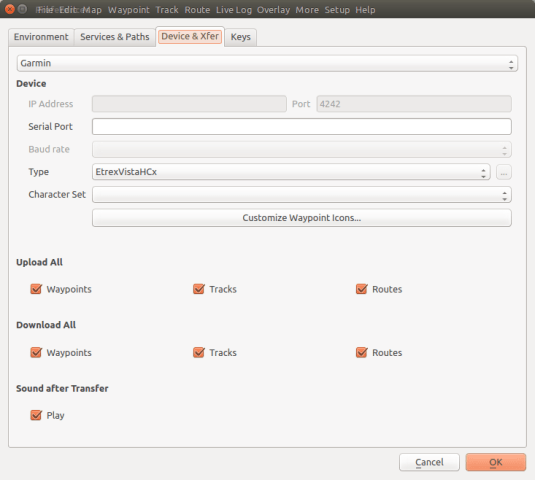