You might remember that we looked at some paradoxes when we studied special relativity earlier this term.  Here is another situation where a paradox can arise.  The German astronomer Heinrich Olbers (1758–1840) asked why the night sky was dark.  At the time, astronomers believed that the Universe was both infinite and steady state (unchanging), so ... Read more evidence in support of the big bang: #3 olbers’ paradox
As we worked through the diagram explaining the stages of the Big Bang model, we looked at a section of the diagram where the Universe was hot enough for nuclear fusion.  At this point, hydrogen nuclei were fusing together with other hydrogen nuclei to create helium nuclei.  As the Universe expanded, it cooled and further ... Read more evidence in support of the big bang: #2 nucleosynthesis
introduction to the Big Bang from mr mackenzie on Vimeo. Georges Lemaître’s theory of an expanding Universe, which has become known as the Big Bang, was supported by Hubble’s observations.  The expanding Universe idea was challenged by influential scientists who believed the Universe was both infinite (and therefore not expanding) and steady state (unchanging).  Supporters ... Read more evidence in support of the big bang: #1 CMBR

Day 2 of EinsteinPlus 2016 saw the group formally welcomed to the spectacular Perimeter Institute building after an equally spectacular breakfast. (There are two excellent bistros at PI, which provided the group with a fabulous range of meals over the week long visit. I'd say more, but there'd be a real danger of this becoming a food blog...)

The morning session was split into two - The final session of the day was a keynote presentation delivered by Professor Avery Broderick from the University of Waterloo on the Event Horizon Telescope (EHT). This program uses nine existing telescopes across the globe and applies a technique known as Very Long Baseline Interferometery (VBLI) to improve the resolution at which images of very small objects can be made. 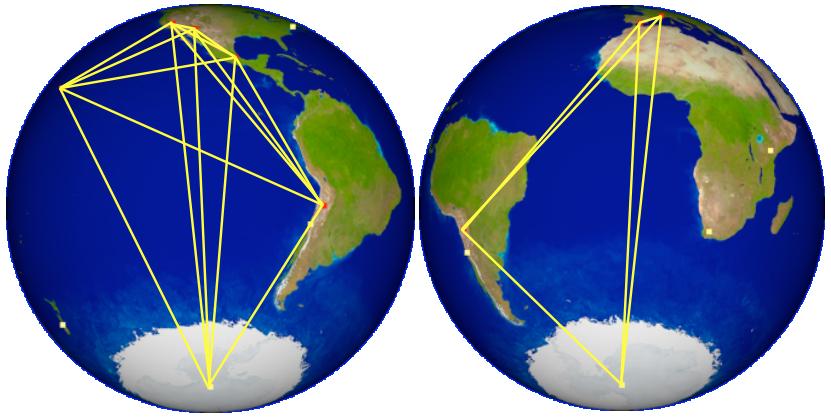 It is hoped that by improving the resolution for existing telescopes and including planned future telescopes in the gathering and processing of data, the EHT will obtain the first direct images of the event horizon for a black hole in our galaxy. Recent observations in the constellation of Sagittarius are thought to indicate the presence of a black hole with a mass around 4 millions time that of our sun. This black hole is of the right size and at the right distance for the EHT to be able to make observations that will allow an image to be obtained in the next few years. The data gathered and images obtained by the EHT will allow for further testing of Einstein's theory of General Relativity, and provide a greater understanding of phenomena such as black hole accretion and plasma jets.

After this presentation and another excellent meal the group was offered a tour of the Perimeter Institute building, offering an insight into how the facilities have been designed and developed in order to attract and facilitate the work of some of the world's foremost theoretical physics (not to mention a very large number of teachers and students).

A selection of images of the building will be included in a gallery as soon as I figure out how to make it work...

The cosmic microwave background radiation (CMB) is radiation left over from the big bang.  When the universe was very young, just as space became transparent to light, electromagnetic energy would have propagated through space at a much shorter wavelength.  Nowadays, the temperature of space has fallen to approximately 2.7 K (that’s 2.7 K above absolute zero!) ... Read more